Last month we told you about one particularly proud day in The Life of Katie. If you didn't get to read it, click here. It's essential reading for full appreciation of the following.

The week the July web page went live with Katie's story of delight and disgust (her delight, my disgust), she embarked upon two more endeavors that left me wondering, just what was I thinking when I got into dachshunds?

Next to the door to the Dachshund Delights workshop is a "toolbox" type of plastic tote – the kind with flip latches and hinges on the lid. There are no tools in it… its only purpose is to provide a perch for the dachshunds to greet people (by barking) or to wait their turn to be picked up (by barking) and carried to the house at the end of the work day. It also gives an advantage point for barking at the UPS delivery person or anyone else who dares approach who is not on the approval list – and, really, even at those who are on the A-list. No one is excluded from the Barking Brigade.

Encircling The Barking Box and the doorway is a wire exercise pen, commonly called an x-pen. This allows the door to be open during nice weather, and it provides unimpeded access to The Barking Box. One end of the x-pen is positioned against the corner of the building where The Barking Box is located and is held in place by a weighted ceramic tile. The ground upon which The Barking Box sits is small limestone gravel. This provides a mud-free area (no matter the weather) for "business" and other outdoor activities during the workday.

Did I say mud-free? I should have clarified: Mud-free as long as no one digs through the layer of gravel to the underlying sediment.

To quote from the AKC Official Standard for the Dachshund:

"His hunting spirit, good nose, loud tongue and distinctive build make him well-suited for below-ground work and for beating the bush. His keen nose gives him an advantage over most other breeds for trailing." 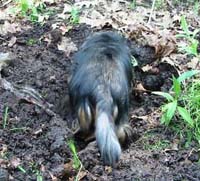 There is an omission in this description: In order for said dog to work below ground, the dog must dig to get to the below-ground quarry.

Whatever secret recipe Becky Burguess of 2 Dogs Long Dachshunds (where my Katie came from) uses to make dachshunds, it most definitely includes the ingredients set forth by the AKC for the Dachshund's inherent traits: Nosey, Barker ("loud tongue"), Digger ("suited for below-ground work").

Again, I ask myself: What Was I Thinking?

On this particular day at Dachshund Delights, it had rained in the morning which, for the purpose of this story, does two things: softens the soil beneath the gravel and heightens any scents that may be lurking.

And a scent was lurking. It may have been from three days ago, but you can't fool Katie – some little creature had dared to enter the sacred space of The Barking Box. But have no fear; Katie would give it her best effort to unearth the trespasser. 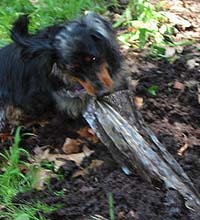 In the corner where the x-pen meets the building wall next to The Barking Box, Katie (unbeknownst to any human in the shop) began her pursuit of The New Scent.

I'll fast-forward to the end result: A mud hole large enough for The Barking Box to now be The Diving Platform, and a mud-streaked longhair dog (with nicely feathered legs) with a mud pedicure.

She not only had mud caked into each crease of her pads and between each toe (making her look as if she had clubbed feet), but she also collected a sundry of bits & pieces of various fabric scraps that often end up outside whether by hook (on our clothes) or by crook (the dogs snitching play pieces). Most noticeable were the white puffs of quilt batting (used in the DreamSacks) that were stuck to the mud. 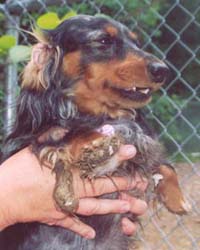 But the best part of all were the "mudballs" that formed on the feathers of her front legs, much like the snowballs she collects on a grand romp through the snow.

Upon closer inspection of her mud-encased collections, I noticed something moving on the mudball. Those of you who read last month's story may be feeling a déjà vu here… this time it wasn't quite as bad as the moving "hair pretties" (maggots), but it was moving nonetheless… an earthworm was clinging to its dirt home and was attempting to slink back into the core of the mudball.

A bath was not as urgent as last month's stench but it was inevitable (did I mention there was mud?).

Part 2 of this month's story occurred just a couple days later. Across the driveway from the workshop on the edge of the woods is a small pile of old mulch, leftover from last year's landscaping but too old now to be used for much… unless you are Katie.

I am convinced, after watching Katie, that digging to unearth the portrayer of a New Scent is an art form. And Katie is a masterful artist. If Michelangelo were a digger, Katie would be his muse. The photos here capture much of her work but what you may not be able to discern clearly is the velocity at which the dirt flies from her paws through the air.

I made two mistakes in indulging her creativity here: 1) Letting her dig until she tired of it; and 2) not cleaning her up soon afterward. In fact, my plan backfired. On some occasions I have just let the mud dry to become "dirt" which makes it easier to get out of her coat. It just usually crumbles and falls off with some brisk brushing. But this concoction on her coat was more than your average dirt. It was mulch and mud. And not just mulch – it was old mulch. Old, stinky mulch. And she had not let her enterprises go at just digging. After she tired of the dig, she went and rolled in some fresh cedar shavings we were using for another outdoor project. This temporarily helped the stinky part but it did absolutely nothing for aiding the removal of mulch and mud.

And so now, after unknowingly letting her "ripen", she had an undercoat of dried, caked-on crap with sprinkles of cedar shavings thrown in for decoration.

This time our date in the bathtub took over an hour to wash – wash – wash – wash – and then wash her again…each application of shampoo invoking a look of "you've got to be kidding" impatience from her. I even filled the tub halfway and let her soak for awhile. Big deal. This stuff wasn't budging. What finally worked was drenching her coat in cream rinse and then combing out the remaining crust.

And now, interestingly, I know how my own mother felt.