It’s July 2013, And We’ve Boldly Gone Where No Dachshund Has Gone Before

Posted by April Scott on 7/1/2013 to Monthly Newsletter 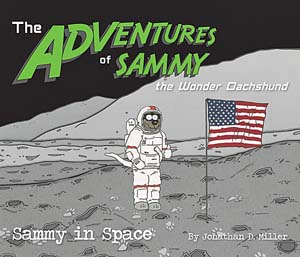 We've reviewed Sammy The Wonder Dachshund's previous two appearances in print – Sammy's Last Week In Charleston and Sammy on Safari, but we haven't seen anything about him for four years now.

The wait is over. Jonathan Miller, Sammy's official chronicler, now presents us with Sammy In Space.

It's been four years, but Sammy still works as a fact checker for the International Internet Corporation, which is an enviable bit of stability in the digital job market.

In his new adventure, Sammy's boss gives him a truly awe-inspiring fact to check: Is (or is not) Pluto a real planet. To make it slightly more difficult, Sammy is given just three weeks to go through astronaut training. Dachshunds are, as we, all know, an extremely intelligent breed. And although we are mostly unable to train them, NASA manages the job nicely.

So Sammy blast off, travels to Pluto, makes his observations, returns and files his report. The literal-minded among you will point out that, at the current state of technology, a trip to Pluto would take years, not days. Anyone who would believe that would probably also believe that a dachshund would be unable to pilot the craft. We make a rude noise in the general direction of such nay-sayers.

As always, the great joy of the Sammy books is the artwork. Instead of doing traditional illustrations, Mr. Miller constructs pictures from cut-out pieces of construction papers, highlighted, as needed, with a Sharpie. Miller says that it takes 30 to 40 hours to do each page – there are 33 of them in this book – and we believe him. Do the math, and you will see that Miller spent the better part of a year doing the artwork for this book as a full-time occupation. From scenes of Sammy's childhood, to his rigorous training for the trip, to the International Space Station, to the triumphant return of his craft, you'll appreciate each of the intricate images. And, as a bonus, Miller has a page showing and telling how he does his paper constructions.

Mr. Miller tells us that in schools he's visited with his new book, the consensus of kids' opinion has been that this is the best Sammy yet. Why not find out for yourself. To order a copy of Sammy In Space directly from the author, click here.
Share |
Previous Post
Next Post