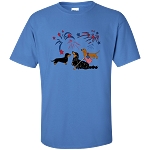 Posted by April Scott on 2/1/2014 to Monthly Newsletter

One of the most memorable (and scary) movie lines of all time, shrieked by the Wicked Witch of the West to Dorothy in the 1939 MGM classic The Wizard of Oz.

I've been a life-long fan of The Wizard of Oz film, now celebrating its 75th year since first delighting audiences on the silver screen. As a child, the annual TV showing of the movie was as anticipated as Christmas. I remember watching it in black & white … until we got one of those fancy colored TVs sometime in the late 1960s. Seeing for the first time the transition from gray Kansas to bedazzling colorful Oz through the magic of Technicolor made me adore the movie that much more. I was bewitched. Dorothy chanted "There's no place home." To me, there was no place like Oz.

Fast forward to September of 2004. The 2003 Tony Award-winning Wicked, The Musical (based on the novel Wicked, by Gregory Maguire) was playing at the Gershwin Theater on Broadway. And I, along with a few friends, had tickets. We were fortunate to get to see most of the original cast, including Idina Menzel and Kristin Chenoweth.

The tagline of Wicked is "A lot happened before Dorothy dropped in." Once I let go of my prejudice that only the MGM movie was "the real story," I was hooked. I bought the original cast recording and several souvenirs. Since then, I have seen it five more times.

That's nice, you're thinking. So what about the dog? That's why we come to this site … to read about dachshunds … OK, OK, just a tick-tock minute.

In November, we received an order for one of our CoverUp coats – not unusual as it is a popular item. It was the shipping address that caught my eye. Alyssa Fox, c/o The Wicked Tour, Murat Theatre, Indianapolis.

WHAT?? Seriously?? WICKED COOL! Through the wizardry of Google, I found out that Alyssa is the standby actress for the lead character of Elphaba on the 2nd National Tour (more happiness). There are two national touring troops and Alyssa is part of the 2nd National Tour, which was next coming to Cleveland. As one of the songs in the musical says "I couldn't be happier … Thank goodness!"

I had to contact Alyssa about the measurements of her dog's coat to make sure we got the right fit. Our crystal ball said they weren't quite right. After discussing the business of the coat, I told Alyssa I was a big fan of the show and had seen it a few times. She was happy to hear that and we chatted a bit about it. I told her we were going to send her a little something special in honor of her role as Elphaba, the Wicked Witch.

So, I set our own resident witch to whipping up a special Hug-A-Dog Harness for Alyssa's dog, a rescue chiweenie named Kamiya. We just so happened to have some Wizard of Oz Wicked Witch fabric on hand from Halloween. Add a touch of embroidery and Kamiya had her own witch's outfit with her name and the words "Defy Gravity", from the show's best-known song.

Alyssa took pictures of Kamiya in her new harness and coat and posted a thank you on her Facebook page and our Hug-A-Dog Harness Facebook page. I contacted her by email to make sure everything fit well. She was very happy with everything and with our kindness and said she would love to give us a backstage tour in Cleveland. Rejoycify! (If you're a fan of the show, you get that.)

Back to the dog …

Kamiya travels with Alyssa on tour. 11 other dogs and a couple of cats are on the tour as well. Cast members are allowed to bring their pets on tour. Sometimes they take a bus to their next location, sometimes they fly. Those who have dogs too big to fly or go on the bus, just drive themselves to the next theater city.

Being on tour with a show like Wicked is, no doubt, exciting and the experience of a lifetime. But it can also be hard to be away from home and loved ones so much. I asked Alyssa about her role with the tour and about Kamiya and how she has helped her. She had some great answers, so I will present our conversation in question & answer format:

Q: What rescue did you adopt her from?
A: I got Kamiya from Lowrider Dachshund Rescue in Oklahoma City (lowriderrescue.com/ or www.facebook.com/LowRiderDachshund) Her entire litter was there at the PetSmart where the adoption was held. My heart goes out to the rescue workers and foster families that help these pups find loving homes! I am so grateful that they could bring this little pup into my life!

Q: How did you know she was the one for you?
A: I originally went to the adoption event "just to look"! When I entered the store, there were a bunch of doxies and doxie mixes in kennel cages. I immediately saw this cute little dark colored Chiweenie sleeping in one of the cages and said to my friend Chelcy, "That's the one. That's my dog!" Kamiya's foster mom asked if I wanted to hold her, and she easily fell asleep in my arms. I teared up because I loved her already!

Q: What does her name mean?
A: Kamiya is a name that means "Divine Valley" in Japanese. I thought that was pretty appropriate for a little wiener dog! I actually named her after my favorite tea blend from the tea shop I was working for at the time. Kamiya Papaya Oolong. Her full name is Kamiya Papaya Fox.

Q: Did you already have her when you got the job with the touring cast?
A: I already had Kamiya for a few years before joining the Wicked tour in 2012. She has lived with me in Oklahoma City, San Francisco, New York, and now around the US on tour! Kamiya is a good road-dog!

Q: Is she a good traveler?
A: She is a pretty great traveler as long as she gets to sit on my lap out of the kennel on the plane or bus. Flight attendants can get a bit snippy with that. Thankfully, I recently got Kamiya certified as an "emotional support" animal so she can sit on my lap on airplane rides. She has a cute little vest and everything!

Q: That's so wonderful that you are able to take her with you on tour. Tell me how she has helped you with the stress of show biz life on the road.
A: Having a dog on tour is a big sacrifice, but also keeps me sane. It's hard to live in hotel rooms every day, so having a furry beast to come home to makes it feel more like home. Sometimes I have to forego certain social events in order to take Kamiya out between shows, but it's all worth it! There is nothing better than a puppy snuggle after a long day. Most people I work with in Wicked get to know Kamiya pretty well too, and come to love her almost as much as I do.

Q: Tell me how you got connected to the Wicked tour? What was your journey to Oz?
A: After about a year and a half of auditions in NYC, I started with Wicked in 2010 as the Elphaba understudy in San Francisco. That company closed and I rejoined with the 2nd National Tour in 2012 as the Elphaba standby!

Q: What is the difference between an Understudy and a Standby?
A: So there are always three Elphabas in each Wicked company: The first is the actual "Elphaba" that plays the role. The second is the standby (that's me!), who only performs the role if the lead Elphie calls out because of sickness, tiredness, vacation, etc. The standby is always available backstage if something happens and the lead needs to call out mid-show. The third cover is the Elphaba understudy who has her own regular ensemble role in the show, but can go on as Elphaba if both the lead and the standby call out.

Q: Describe what it's like to be the standby
A: Being the standby is hard work. You have to be able to perform at a moment's notice. I always have my cell phone on me just in case! One time I had to go on mid-show – the lead Elphaba was coming down with a case of laryngitis, so she let them know backstage, and our stage manager called me in to get my green makeup on. It takes about 20 minutes to get ready and all painted up, but the hair and makeup people are so good at their jobs that they can do it faster when they have to. I ended up going onstage for the Emerald City scene, with "Defying Gravity" right after. Talk about being shot out of a cannon! Zero to 100 in about 15 minutes.

Q: Every time I've seen the show, the "Defying Gravity" number gives me chills. It's got to be incredible for you, the performer. Tell me what it's like for you. Is it your favorite moment of the show? Or is there another favorite song/part?
A: Defying Gravity is the hardest part of the show, in my opinion. But it's very exciting when it all comes together. My favorite song in the show is actually "No Good Deed" – It's so fun to put all those emotions out there and be the Wicked Witch.

Q: Has any of your family gotten to see you perform in Wicked?
A: Last August, our tour was in Houston, Texas, and Jenny (lead Elphaba Jennifer DiNoia) went on vacation, so I got to perform for a whole 8-show week! Texas is my home state (born in Dallas), so a lot of my family and friends got to see it.

Thank you, Alyssa Fox, for taking the time to answer my questions and a special thank you for the personal backstage tour you gave us in Cleveland. You have gained new fans, no matter what role you play in your career!