Posted by April Scott on 8/1/2013 to Feature of the Month
A year ago this month, we gave you a direct-from-the-set report on a movie called Wiener Dog Nationals, then being shot in California. 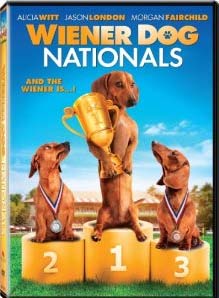 We can now report that the movie has been released on DVD! And if you stick around for the end credits, you will find Hug-A-Dog Harnesses listed as a business partner, and thanks tendered to Shirley McFall and Dachshund Delights for harnesses and costumes. There's probably no category in which we can win an Oscar, but for us humble folks from northeast Ohio, it's a taste of show biz.

So, you are wondering, how's the movie? We can reliably report that it's good family entertainment. The moviemakers have wrapped a story around the real Wienernationals sponsored each year by Wienerschnitzel fast food restaurants, and they've found a talented cast to tell that story. The three lead kids actually act like real kids, which means that they're not always paragons of virtue, and they can get to be appropriately annoying at times. The "villain" of the piece is played by Morgan Fairchild, who was a hot babe of early 80s TV and movies and who played an ongoing character in the TV show "Flamingo Road." And even if you're too young to have been watching TV back then, you'll be able to see the spark that kept her in the public eye for years. She's clearly having a good time, and you get the feeling that if they had given her a false moustache, she would have twirled it and cackled maniacally. Cruella DeVil without the need for a new fur coat. Her more-or-less stooge is played by Bryan Batt, who will be instantly recognizable to fans of the early seasons of "Mad Men."

But, let's face it, the real draw for us is going to be the dachshunds, and there are plenty of good-looking ones to be seen. The lead dachshund, Shelly, is played by five different dogs, one of them being Presley, a real-life Wienernationals champion, and the inspiration for the book Geenie and the Weenie Race, which we reviewed in June of 2012.

We recommend this movie as a fun evening for the family, and we particularly recommend that as soon as you've watched it, you go back and read the article that Shirley did for us last year, so you can get an idea of the semi-controlled chaos that goes into making what appears to be a fairly simple film.